Emmi generated net sales of CHF 3,494.0 million in 2019. This corresponds to a 1.1 % increase (2018: CHF 3,457.4 million). At 2.2 %, organic sales growth is in the upper third of the company’s own expectations of 1.5 % to 2.5 %. It is pleasing that all four business divisions were able to achieve growth organically, with Switzerland and Europe in particular showing a strong sales development in the second half of the year. Emmi Caffè Latte was a success factor here. Emmi still maintains its earnings targets announced in February 2019. The results will be communicated on 2 March 2020.

The most important sales key figures 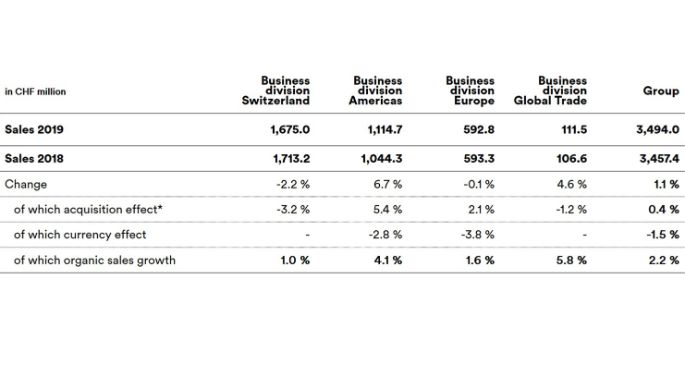 *Acquisition effects are accounted for by the following factors:

Emmi generated net sales of CHF 3,494.0 million in 2019. The growth of 1.1 % versus the previous year (CHF 3,457.4 million) comprises organic growth of 2.2 %, a positive acquisition effect of 0.4 % and a negative exchange rate effect of -1.5 %. The pleasing organic growth of 2.2 % was broad-based across all business divisions and is in the upper third of the projected range, which was adjusted during the presentation of the half-year results from between 2.0 % and 3.0 % to between 1.5 % and 2.5 %. Organic growth was significantly stronger in the second half of the year compared to the first half, especially in business divisions Switzerland and Europe. Growth was driven by strategically important niches such as Italian dessert specialities and goat’s milk products, Emmi Caffè Latte and the growth markets of Latin America and North Africa.

Last year was again marked by intense work on the investment and product portfolio as part of the multiyear corporate strategy. In this way, Emmi strengthened its position in growth markets outside of Europe and invested in niche areas. Urs Riedener, CEO of Emmi, commented: “We were very active in acquisitions in 2019, which will open up important development potential over the coming years. This will allow us to strengthen our business in growth markets, promote private labels and further expand our solid position in Italian desserts and goat's milk products.”

In Switzerland, organic growth of 1.0 % exceeded expectations (0 % to 0.5 %); this was partly due to the positive development of Emmi Caffè Latte and the milk price increase as of 1 October 2019. Organic growth of 4.1 % in business division Americas was at the lower end of the forecast range (4 % to 6 %). The business division performed particularly well in cow’s and goat’s milk cheeses and was bolstered by sales of Emmi Caffè Latte in Spain and the Mexico market. By contrast, ongoing unrest in Chile and low milk collection in Tunisia pose a challenge. At 1.6 %, business division Europe recorded organic growth above the projected range, which was adjusted downward to between -1 % and 1 % following the half-year results. In Europe, strategically relevant niche markets such as Italian dessert specialities and goat’s milk products achieved pleasing growth. While Emmi Caffè Latte also posted strong growth in Europe, lower volumes and prices at Gläserne Molkerei in Germany had an impact on growth in business division Europe.

In 2019, sales in business division Switzerland amounted to CHF 1,675.0 million (2018: CHF 1,713.2 million), which corresponds to a decline of 2.2 %. Adjusted for divestment effects (sale of Emmi Frisch-Service AG to Transgourmet and sale of part of the trading goods business to Coop), organic growth still stood at 1.0 %, significantly above Emmi’s growth forecast of 0 % to 0.5 %.

High organic growth in dairy products (milk, cream, butter) was due in part to higher milk prices across the board from 1 October 2019. In addition, sale quantities of milk and cream were up despite persistently strong price pressure. Fresh cheese also posted organic growth, with protein-enriched curds and the new product launches for “Toni’s” (cheese spread and mozzarella) making a major contribution to results.

The other two large product groups cheese and fresh products recorded a slight organic decline in sales. Cheese brand concepts such as Luzerner Rahmkäse, Scharfer Maxx and Le Petit Chevrier performed well, but the marked rise in cheese imports and the resulting price pressure had a negative impact on sales. In fresh products, Emmi Caffè Latte and Emmi Energy Milk achieved a positive development, while sales of yogurt and ice-cream were not satisfactory. 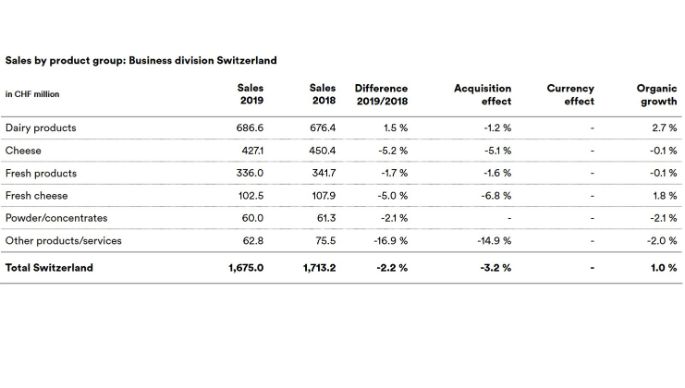 Business division Americas generated sales of CHF 1,114.7 million in 2019 (2018: 1,044.3 million), an increase of 6.7 %. In organic terms, i.e. adjusted for currency and acquisition effects, growth amounted to 4.1 %. This is at the lower end of the forecast range of 4 % to 6 %, which is attributable to the scarcity of milk in Tunisia, social unrest in Chile and lower sales in Spain. The growth drivers in this business division were Mexico and the US as well as – in spite of the factors cited above – Chile and Tunisia, although to a lesser extent than in previous years and compared to original forecasts.

The acquisition effect on the sales performance of business division Americas is attributable to the purchase of a blue cheese production facility in the US and the increased stake in Laticínios Porto Alegre in Brazil, which had an impact on the scope of consolidation.

In the largest segment, cheese, locally produced cow’s milk cheese in the US and Chile and the goat’s cheese business (Cypress Grove) had a positive effect on growth. In the dairy and fresh products product groups, growth was stifled somewhat by social unrest in Chile and the ongoing scarcity of milk in Tunisia. Nevertheless, both countries continued to drive growth in these product groups. Sales of dairy products was also hampered by the difficult market situation in Spain, where lactose-free dairy products, an important segment for Kaiku, are under considerable pressure. Positive performers included the dessert business in Tunisia (locally produced desserts) and France (Italian dessert specialities) as well as Emmi Caffè Latte, which enjoyed strong growth in Spain. The high level of organic growth in fresh cheese is attributable to strong performance in Mexico (imported fresh cheese) and new fresh cheese products in the US (Redwood Hill). In other products/services, growth is attributable to Mexico and Chile. 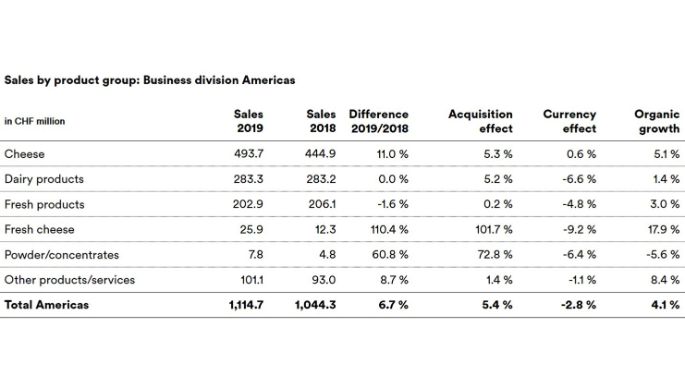 Business division Europe generated sales of CHF 592.8 million in 2019 (2018: CHF 593.3 million), which corresponds to a decline of 0.1 %. But in organic terms, i.e. adjusted for currency and acquisition effects, sales grew by a pleasing 1.6 %. This exceeded the forecast range, which was lowered to between -1 % and 1 % following the half-year results. Business division Europe posted pleasing growth, especially in strategically relevant niche markets such as Italian dessert specialities and goat’s milk products and with strategic brands such as Emmi Caffè Latte. By contrast, low sales at organic milk processor Gläserne Molkerei in Germany inflicted a major dent on growth.

In fresh products, the most important segment for this business division, the strategically important areas of Italian dessert specialities and Emmi Caffè Latte were decisive growth factors. The latter experienced growth in all European markets, most notably in the UK. The cheese segment recorded a negative organic performance overall, primarily due to lower sales of AOP cheese (mainly Emmentaler AOP). Speciality cheese, however, posted a positive performance, in particular cave-aged KALTBACH cheese in Germany. The significant growth in fresh cheese is attributable to the pleasing sales performance of fresh goat’s cheese in the Netherlands. The main reason for the considerable decline in sales of dairy products is Gläserne Molkerei in Germany, with lower processed milk volumes combined with low prices for organic milk proving the main drag on performance. In the powder/concentrates segment, Dutch trading company AVH Dairy achieved high growth in goat's milk powder sales. 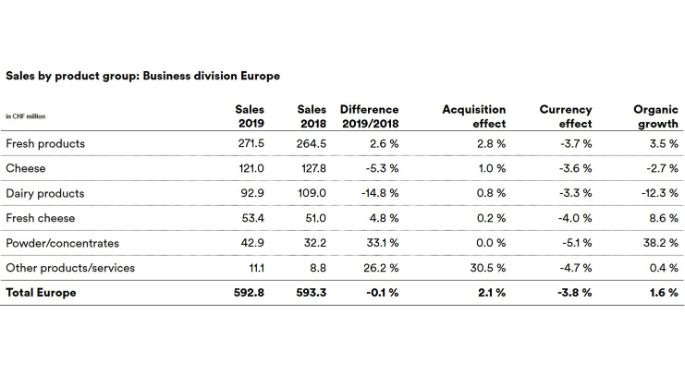 Business division Global Trade primarily comprises direct sales from Switzerland to customers in countries where Emmi has no subsidiaries. These include the Asian and eastern European markets, most South American countries and the Arabian Peninsula.

The sales growth in business division Global Trade is primarily due to the strong increase in milk powder exports (powder/concentrates), while sales of the two major product groups fresh products and cheese remained largely stable. Whereas sales in China, Finland and Spain* edged upwards, losses were recorded in particular in Brazil* (fondue). 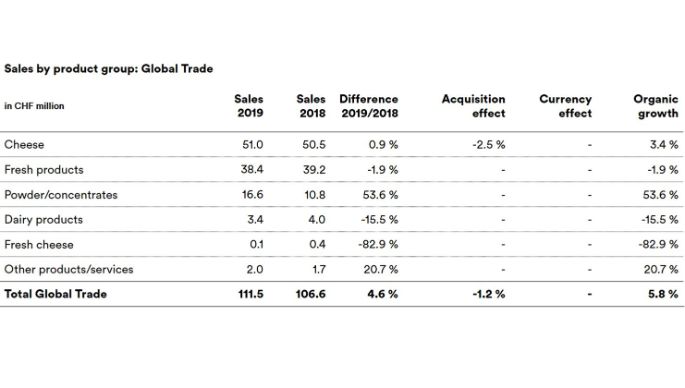 *Export products from Switzerland not sold via local subsidiaries

For 2019, Emmi maintains the earnings forecast communicated in February and confirmed following the half-year results.

Emmi will issue its forecast for sales and profit in 2020 when the figures for financial year 2019 are published. The analysts’ and media conferences will take place on 2 March 2020 in Lucerne.

In Switzerland, the Emmi Group has 25 production sites. Abroad, Emmi and its subsidiaries have a presence in 14 countries, seven of which have production facilities. Emmi exports products from Switzerland to around 60 countries. Its business activities focus on the Swiss domestic market as well as Western Europe and the American continent. Half of its CHF 3.5 billion in sales – over 10 % of which stems from organic products – is generated in Switzerland, the other half abroad. More than two-thirds of its over 8,000 employees now work at locations outside of Switzerland.