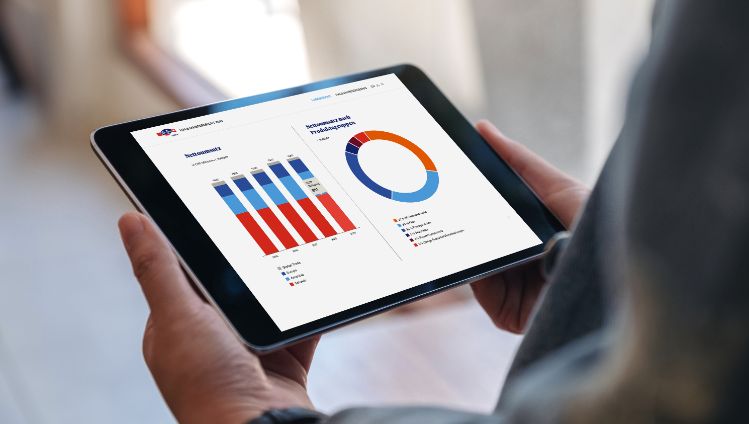 Emmi made good progress in the first half of 2019 thanks to the consistent implementation of its strategy. The business was further strengthened with a special focus on growth markets and the expansion of the strategic niche areas of desserts, organic products and goat’s milk. At operational level, Emmi held up well despite the difficult environment thanks to strong innovation and the Emmi Operational Excellence cost-saving programme. Organic sales growth of 1.6 % was slightly below expectations, but Emmi is still on track to meet its earnings targets. Compared with (adjusted) prior-year figures, EBIT was slightly down in the first six months of the year, while net profit was slightly up. 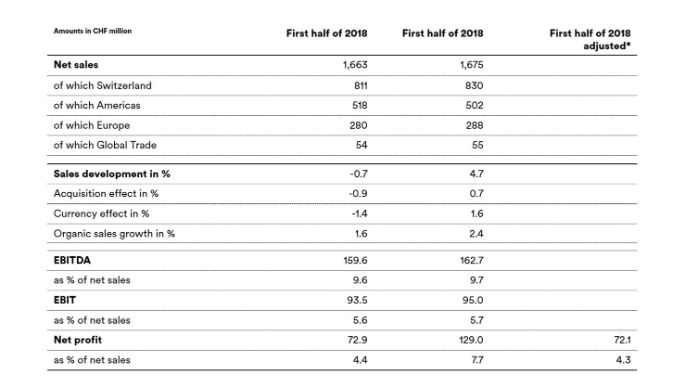 *adjusted by CHF 56.9 million from the sale of the minority stake in Icelandic Milk and Skyr Corporation «siggi’s».

DThe overall negative acquisition effect of 0.9 % is due to the following negative factors:

A positive factor to note is the purchase of a blue cheese production site (US, 28 February 2019).

In the first six months of financial year 2019, Emmi achieved modest organic growth of 1.6 % overall. While organic growth in Switzerland was solid at 0.5 % and in the business division Americas on target at 4.3 %, in the business division Europe it fell short of expectations – amounting to 0.7 % overall – due to lower sales at Gläserne Molkerei in Germany. Sales of Emmi Caffè Latte performed very well in all business divisions. Encouraging growth was also posted in strategically relevant niche markets such as Italian dessert specialities and goat’s milk products. Other growth drivers in the first half of 2019 included the growth markets of Chile, Mexico and Tunisia.

In the first half of 2019, Emmi generated EBIT of CHF 93.5 million, a decrease of 1.6 % compared with the previous year (CHF 95 million). Although the gross profit margin rose from 36.1 % to 36.4 % thanks to the consistent focus on the portfolio, the EBIT margin dipped slightly from 5.7 % to 5.6 % due to high cost pressure. This is a remarkable result, given the difficult environment in the sector. Urs Riedener, CEO of Emmi, commented: “We’re seeing once again the importance of the cost-saving programme which Emmi has been constantly expanding for over ten years.” In the end, net profit amounted to CHF 72.9 million – an increase of 1.1 % compared with the (adjusted) prior-year figure of CHF 72.1 million. The net profit margin was 4.4 % (previous year, adjusted: 4.3 %).

The systematic implementation of the strategy includes further solidifying the company’s positions in growth markets outside of Europe and investing in strategic niche areas. Emmi took various measures to further this goal in the first half of 2019. In June 2019, Emmi announced its plan to increase its stake in Laticínios Porto Alegre Indústria e Comércio S.A., based in Ponte Nova, Brazil, from 40 % to 70 %. Another area of focus was the expansion of the international goat’s milk network following the announced purchase of a 66 % stake in Austrian organic goat’s milk and sheep’s milk processer Leeb Biomilch GmbH. The strategic Italian dessert business will be further boosted by the purchase of Pasticceria Quadrifoglio S.r.l. The acquisition of the blue cheese production site in the US and the sale of Emmi Frisch-Service AG in Switzerland are also important steps in the implementation of the strategy.

Details of sales and earnings performance

Sales business division Switzerland: at the upper end of expectations 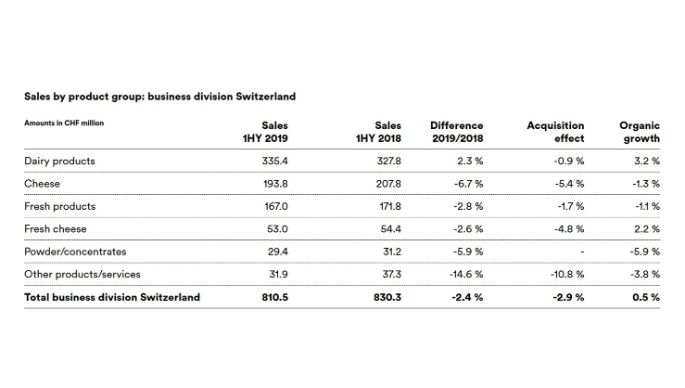 Net sales in the business division Switzerland amounted to CHF 810.5 million, a decline of 2.4 % compared with the previous year’s level (CHF 830.3 million). Adjusted for the abovementioned divestment effects (sale of Emmi Frisch-Service AG, sale of part of the trading goods business), organic growth amounted to 0.5 %, which is at the upper end of the forecasted range published in February 2019 of 0 % to 0.5 % for the year as a whole. The business division Switzerland accounted for 48.7 % of Group sales.

The organic growth in business division Switzerland is primarily due to dairy products. Higher sales volumes of milk and cream more than made up for the decline in butter sales despite ongoing significant price pressure. The two other major product groups, cheese and fresh products, recorded slightly lower sales in organic terms. In the cheese segment, the decline mainly affected cheese varieties. This performance reflects the continued increase in cheese imports compared with the first half of 2018 as well as the general price pressure in this segment. By contrast, various speciality cheeses such as Luzerner Rahmkäse, Scharfer Maxx and Le Petit Chevrier experienced growth. Among fresh products, the organic sales decline was primarily down to losses on private label products of retailers (yogurts and ice cream). Conversely, branded products like Emmi Caffè Latte and Energy Milk posted significant growth. 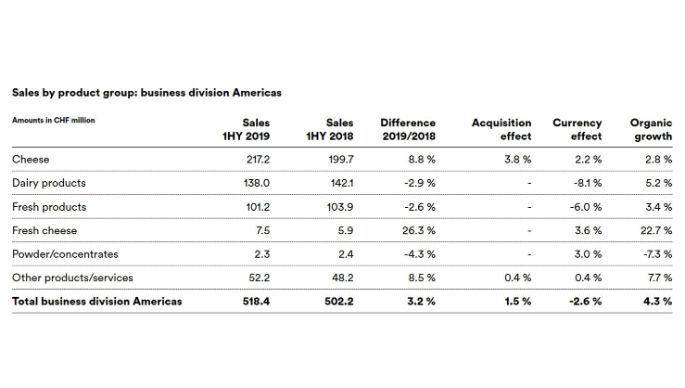 Sales in this business division improved over the first six months of 2019 from CHF 502.2 million to CHF 518.4 million, corresponding to growth of 3.2 % year-on-year. In organic terms, i.e. adjusted for currency and acquisition effects, this resulted in growth of 4.3 %. This figure is in line with the full-year forecast from February 2019 (4 % to 6 %). The positive organic sales growth is attributable in particular to the growth markets of Chile, Mexico and Tunisia. The business division Americas accounted for 31.2 % of Group sales.

Organic growth in the cheese segment is mainly due to the Mexideli trade business, Emmi Roth sales of Swiss cheese (e.g. Le Gruyère AOP), the goat’s milk business in the US as well as locally produced cheese in Chile. The dairy products segment posted organic growth of 5.2 %, attributable primarily to the good sales performance in Tunisia (milk, butter) and Chile (milk, cream). Sales of fresh products grew organically by 3.4 %. The positive influencing factors here were sales increases in Italian dessert specialities in France, yogurt and milkshakes in Chile and Kaiku Caffè Latte in Spain. Growth was slowed somewhat by moderate sales of yogurts and yogurt drinks in Spain as a result of market conditions. 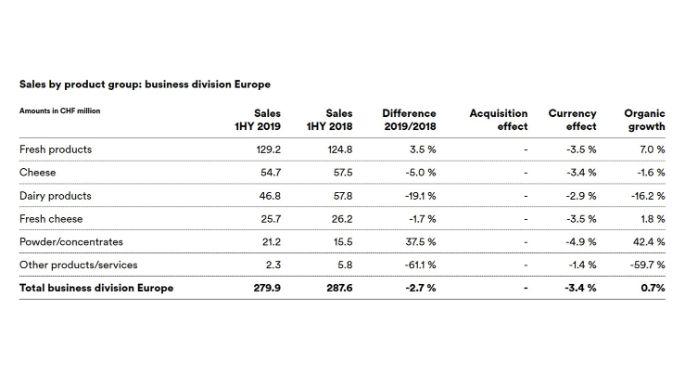 The fresh products segment posted very pleasing organic growth of 7.0 %. The main drivers of this positive sales growth were Emmi Caffè Latte in all European markets and the Italian dessert specialities business. Meanwhile, sales of Onken yogurts fell in Germany and the UK. Organic sales in the cheese segment dropped 1.6 %. This negative difference was mainly down to a decline in exports of Emmentaler AOP from Switzerland to Italy. Conversely, certain speciality cheeses – such as Kaltbach in Germany – posted very good results. Dairy products experienced a significant organic decline in sales of 16.2 %, which was mainly attributable to a steep drop in sales at Gläserne Molkerei in Germany. This unwelcome development was due to a combination of lower milk volumes processed and generally lower prices for organic milk. Strong organic growth of 42.4 % in the powder/concentrates segment was a result of high sales of goat’s milk powder at trading company AVH dairy and its own production (Goat Milk Powder) in the Netherlands. 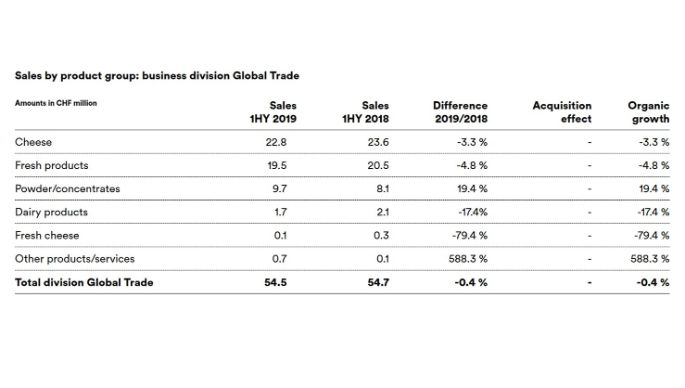 Sales in this business division amounted to CHF 54.5 million in the first half of 2019, compared with CHF 54.7 million in the previous year – a decrease of 0.4 %. Decreases in the two important segments of fresh products and cheese are primarily down to lower sales of yogurt drinks and fondue. This is also a result of the renewed strength of the Swiss franc. The increase in the powder/concentrates segment reflects the rise in milk powder exports.

Detailed explanations of the sales performance can be found in the Emmi half-year report 2019.

Gross profit amounted to CHF 604.9 million in the period under review (previous year: CHF 604.5 million). This modest increase is particularly positive considering the CHF 11.5 million decline in net sales. Negative currency effects and the overall negative acquisition effects weighed on gross profit. This positive development is attributable to organic growth, especially in the business division Americas. The gross profit margin also rose from 36.1 % to 36.4 %. The focus on strong brand concepts and the systematic implementation of rationalisation and productivity measures once again played a key role in combatting persistently high price pressure from customers.

Earnings before interest, taxes, depreciation and amortisation (EBITDA) decreased by CHF 3.1 million or 1.9 % to CHF 159.6 million (previous year: CHF 162.7 million). The EBITDA margin declined slightly from 9.7 % to 9.6 %, due to the disproportionate increase in other operating expenses compared with sales. The rise in expenses for logistics, energy and operating materials was particularly high. Passing on these costs to customers through higher prices proved to be challenging.

Earnings before interest and taxes (EBIT) were CHF 93.5 million in the period under review, CHF 1.5 million or 1.6 % below the previous year’s EBIT of CHF 95.0 million. The EBIT margin was also slightly lower at 5.6 % compared with 5.7 % in the previous year.

Emmi is bracing itself for a continuing highly competitive environment in the second half of 2019. In Switzerland, price pressure from retailers will remain high. Emmi expects to encounter further risks due to the strength of the Swiss franc and as a result of current political developments. Emmi is robust and well diversified, which will help it to overcome these challenges.